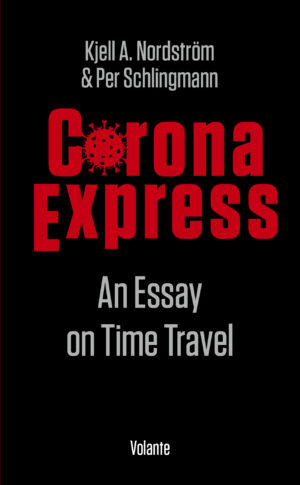 An important and well-formulated lesson in what it is possible to know about what we don t know. This is a gem which frightens a little, and inspires a great deal. MICAEL DAHLEN, Professor, Stockholm School of Economics

How the pandemic became a time machine. We have been thrust into a radically digitalized future. But in other areas, such as poverty and international trade, we have stepped back in time. Our social habits have been transformed and even our language has changed.

In the international bestseller Urban Express, authors Kjell A. Nordström and Per Schlingmann identified expanding cities and women as the key agents of change in our time. But the pandemic has triggered an array of forces which will change the rules of the game for individuals, companies and society as a whole. Which of these changes will last and which will fade away as the pandemic recedes? And how can we make the most of the opportunities which arise?

I. The new (ab)normal

II. The roaring twenties in the 21st century?

IV. Where does global, urban and digital take us now?

VI. Our societies beyond the pandemic

Kjell A. Nordström, Ph.D, is an adviser to global enterprises and a well-known speaker and economist. He has a background as a researcher at the Stockholm School of Economics, specializing in International Business.

Per Schlingmann is an entrepreneur and author, previously known as the leading political strategist in Sweden.

Corona Express is an extremely wise companion. The book is a must for anyone who wants to understand how you should lead yourself and others into the future! PER BROMAN, founder, Fotografiska

The book can be regarded as a survival guide for all of us who love the city and have faith in its capability, but who realise that the time of change is here. ANNA KO NIG JERLMYR, Mayor of Stockholm

A rewarding book where Kjell A. Nordstro m and Per Schlingmann write in a snappy way about how the pandemic, in which we all find ourselves, is forcing development forwards. JOHAN HJERTONSSON, CEO, Latour

Författare
Kjell A. Nordström & Per Schlingmann